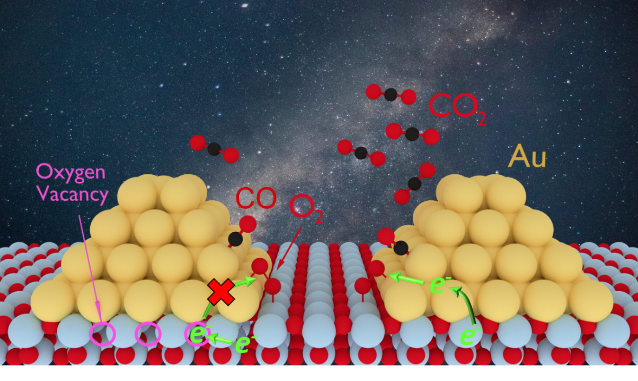 A collaboration paper from the Wei group and Angerhofer group has been published in JACS. The article titled “Manipulating Atomic Structures at the Au/TiO2 Interface for O2 Activation” reports a discovery of new science in an old catalytic system (Au/TiO2)   by demonstrating how the manipulation of atomic structures at the Au/TiO2 interface significantly altered the interfacial electron distribution and prompted O2 activation. Using a novel materials fabrication strategy, we constructed two distinct Au/TiO2 heterostructures, with defect-free interface and Vo-rich interface. It was found that at the defect-free Au/TiO2 interface, electrons were transferred from Ti3+ species into Au nanoparticles (NPs) and further migrated into adsorbed perimeter O2 molecules, facilitating O2 activation and leading to a 34 times higher CO oxidation activity than that on the oxygen vacancy (Vo)-rich interface, at which electrons from Ti3+ species were trapped by interfacial Vo on TiO2 and hardly interacted with perimeter O2 molecules. We further revealed that the calcination released those trapped electrons from interfacial Vo to facilitate O2 activation.  Taken together, our results not only established an atomic-level understanding of the interfacial-structure-dependent catalytic activity on Au/TiO2 heterostructures, but also provided strategies to engineer metal/oxide interfaces for the optimization of heterogeneous catalysis.