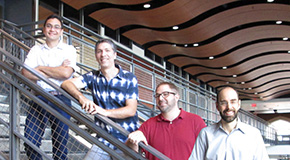 Chemistry Professors Leslie Murray, Nick Polfer, Aaron Aponick and Ron Castellano were recently selected to receive University Term Professorship Awards. These three-year professorships were created by UF to recognize faculty who have established a distinguished record of research and scholarship that is expected to lead to continuing distinction in their field. Congratulations to Aaron, Ron, Leslie and Nick for bringing honor to the Department through their scholarly accomplishments. 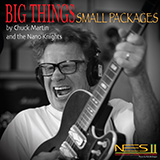 Distinguished Professor Charles R. Martin is UF Chemistry Department’s renaissance man – both a nanoscience pioneer and an award-winning songwriter who has released seven albums of original rock and Americana music. Martin recently got to combine these passions for science and art in a songwriting gig from the US Department of Energy (DOE).

Martin is a member of a DOE Energy Frontier Research Center (EFRC), of which there are 36 nationwide. DOE invited all the EFRCs to contribute to their “Intersection of Sound and Science Podcast, ” where each team gets three minutes to “educate, inspire and entertain” a general audience about their research.

Martin’s EFRC, called Nanostructures for Electrical Energy Storage, called on him to pen and record their entry. Building on the nano theme, he wrote an original rock song called “Big Things Small Packages.” He then recruited a bassist and drummer and made a professional recording in a Gainesville studio. Martin played electric and acoustic guitar and sang all the vocals on the recording.

“It was a thrill to wear my artistic hats (songwriter, recording artist, record producer) in this scientific format. I need more gigs like this,” says Martin. The Podcast is July 28 and is a competition. Wish Chuck luck. 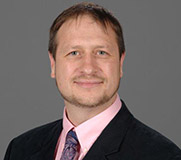 On April 13, 2017, the University of Florida Research Foundation named Professor Adam Veige as one of 34 UFRF Professors for 2017-2020. UF recognizes faculty members for having distinguished current records of research and strong research agendas likely to lead to continuing distinction in their fields.

“Faculty chosen for UFRF Professorships have a proven record of research and scholarship and the potential for even more success in the future,” said David Norton, UF’s vice president for research. “History has shown that by investing in these outstanding faculty, we can generate significant return in research discoveries, scholarship and technology transfer.”

The UFRF Professors were recommended by their college deans based on nominations from their department chairs, a personal statement and an evaluation of their recent research accomplishments as evidenced by publications in scholarly journals, external funding, honors and awards, development of intellectual property and other measures appropriate to their field of expertise. In many colleges, the selection process is conducted by a special faculty committee.

Congratulations to Jordan Levi and Guancen Liu who have been named co-recipients of the 2019 Keaffaber Scholar Award. The award…
Congratulations to Dr. David Wei on receiving the University of Florida Research Foundation (UFRF) Professorship. Photo with our chair Dr. Lisa…

Dr. Zhongwu Guo, UF Professor of Chemistry and Steven and Rebecca Scott Chair, recently received a UF Innovation of the…

Wei David Wei, Ph.D., was named University of Florida Research Foundation (UFRF) Professor for 2019-2022. The recognition goes to faculty…
Scroll back to top