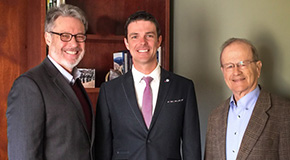 Dean Richardson has announced the appointment of Professor Brent Sumerlin to succeed Professor Ken Wagener as Butler Chair of Polymer Chemistry beginning with the fall semester, 2017. Brent joined the Department of Chemistry faculty in 2012 as Associate Professor, moving here from Southern Methodist University, where he had established a widely recognized research program involving the synthesis and investigation of stimuli-responsive polymeric materials. He was promoted to full professor in 2015 and has been the recipient of numerous prestigious awards, including the 2015 Biomacromolecules/Macromolecules Young Investigator Award (ACS) and the 2016 Hanwha-Total Young Scientist Award. He also was recently named an Associate Editor of the journal: ACS Macro Letters.

In view of the strong record of Brent’s professional accomplishments and contributions to the Department and to the Butler Polymer Research Laboratory since moving to the Department, Brent has been chosen to assume future leadership of the increasingly potent and internationally recognized UF Chemistry polymer program as Butler Chair.

The UF Department of Chemistry is pleased to announce that Mr. Robin H.J. Kemperman is named the Howard and Brenda…

We are pleased to announce that Christopher Brewer has been selected as a recipient of the 2020 Dorothy M. and…

The Analytical Chemistry Division is pleased to announce the recipient of the 2020 James and Laura Winefordner Summer Graduate Scholarship,…

The award in analytical chemistry or polymer characterization goes to Taylor Domenick. Taylor received her BS degree from the College…

This program aims to highlight up-and-coming postdocs and provide a platform for them to share their work at the ACS,…
Scroll back to top